Name: Rob Jones
Age: Depends … can be the right or wrong side of 50!
Occupation: Printer, has worked at and owned Colwyn Printing since 1983. I printed Torque magazine from 1985 until recently.
Car: Peugeot 306DT road car and the Shed 3
Interests: Rally photography and a bit of motorsport

How did you start?
First saw my first rally car around 1976 when I used to watch Ian Hughes testing his yellow MkI Escort in a nearby disused quarry where we used to live in Colwyn Heights. At the time I had no interest rallying, I was more fascinated with Ian’s younger brother, Lenny, who was into trial biking and could do a wheelie on his push bike up and down our road in Sunningdale Grove, a distance of around 500 yards!

In 1977 I went with a friend on our push bikes to watch the Gwynedd Rally around the Orme, and on returning home, duly painted red and green Castrol stripes around my bedroom, much to the satisfaction(!) of my parents. At this point my mother and father were members of the Sailing club in Rhos, which was also the car clubs clubhouse. Dad became interested in motorsport and bought a MkI Mini, and contested a few PCT’s and autotests, which I also marshalled on. In 1978 dad prepared the Mini for rallying with the help of John Braid, while dad serviced for John on the rallies that he did in the ex-Colin Mack Avenger, on which I was allowed to tag along.

In 1979, the club introduced junior membership and I was one of the first junior members, and that’s when I got totally hooked! My first rally, the Palferman Rally on Anglesey was with dad, with tuition on map reading and plotting from DVT and Mike “boghead” Armisted (who had navigated for both JB and my dad), but it ended in retirement when we hit a wall, breaking the steering!

I was out marshalling on most local events from PCT’s, autotests and rallies, winning the club’s first Marshals Championship and the prize was co-driving John Briad on the Cambrian in 1980, and I was only 15 years old!

In 1980, I managed to compete on five rallies with JB, the Palferman and NWCC Silver Jubilee Rally to single venues at Rhiwlas and Oulton Park, rounding off the year with the novice Petite Rally with Aled Williams in a MkI Escort, plus driving on autotests and trials, and navigating on night navs. The only problem was, I was still at school taking my “O” levels and I didn’t have any money. So, after sitting my exams (which I failed the most important ones), I managed to land a summer job delivering bread, courtesy of Ray Carlisle, and the money I earned fro that job paid for two years of rallying!

In the summer of 1981, I received a call from school friend and fellow rallyist, John H Roberts saying that a rally driver from Glan Conwy was looking for a navigator for a local event. So … I jumped on my push bike and rode to the coal yard in Glan Conwy and met John “the coal” … and the rest is history … lots of success, even more despair, lots of bent rally cars and even more drunken nights!!!

I have been lucky enough to navigate for alot of drivers on events from club to World Championship, both here and a few abroad, with some success, and have a few stories that I can tell, when I am in my rocking chair!

Who said I could drive!?
I passed my driving test a few months after my 17th birthday, but it wasn’t the first time that I had driven. I had contested many autotests and PCT’s the year before on local club events … but the story doesn’t start there! Remember I had said that my parents had been members of the sailing club … well, while they were away, I was enjoying the freedom of driving dads Mini up and down the
drive, then the roads around our house, with the occasional adventure to Bryn-y-Maen and back, and I was only 15 (very naughty and I wouldn’t recommend it to any youngsters reading this). Anyway, I got the feeling that dad had an idea of what I was doing as one evening while getting the Mini out of the garage, it wouldn’t start. A quick look and I noticed that he had taken the brake vacuum pipe off the inlet manifold, a quick fix! Anyway it all came to an end when my brother decided that he wanted to have a go and duly planted the Minivan we had into the front garden brick wall! And that was the end to my jollies, and hence given the opportunity to drive on autotests and trials,
to get it out of my system.

I eventually got my first car in 1982, a Mini Countryman complete with wood (nicknamed the “Shed”) and that was soon to be put in competition. My first rally was the Petite Rally in 1983 with Dave Rothery and we were seeded first beginner. Two navigators in one car doesn’t help and we gained a fail … but at least I had the satisfaction of passing a Triumph Vitesse 1850 along the twin lakes road!

The woody was replaced after a few more events, with awhite saloon version (Shed 2), and I made the decision to just “drive” during the 1985 season, and what a year. I had decided to do a two year City and Guilds printing course in Liverpool, eight months full time and then just Fridays. Getting up at 5.30am to catch the 6am train at Colwyn Bay arriving at Liverpool’s Lime Street at 8.50, full day at college then train back to Colwyn Bay for 7.30pm, into work to catch up, certainly took its toll on car preparation, as most weekends were taken up competing, with some success but a lot of retirements.

A typical weekend consisted of a stage rally over Saturday and/or night rally followed by an autotests or trial on the Sunday. Just to give you an example, one weekend in July I remember well. It was the first Live Aid contest, and the idea was a stage event at Aintree with Pete Buckley, a drive down to Machynlleth for the Bro Dyfi road rally with Sharon Blackall, then up to Chester to do an autotest on Sunday. This didn’t go as planned. Basically the Mini’s diff decided to make its way for freedom halfway through the event. Managed to find a ride on the Bro Dyfi with a lad from Bala in an Escort, but a combination of wet slippy roads, bald Pirelli P7’s and an over-enthusiast novice driver, saw us off big style, after a spin into a tree, hitting my door and falling backwards down 30 odd feet into Lake Vynwy. Now that is terrifying enough, but hitting the tree had broken my seat mounting and as we hit the water backwards, I was launched through the back window into the water. Thankfully we were both OK and the car was retrieved with the use of two Landrovers, and we went back to his parents farm just outside Bala, for some sleep. At around 9 in the morning I was woken by the squawking of a parrot going wild in its cage, and looking out of the bedroom window, saw that the barn was engulfed in flames! The fire brigade arrived some ten minutes later and the fire was out. Arrived home mid afternoon.

Despite entering nearly 50 events that year, I only managed to win the “big steering wheel” for coming second in the clubs driver’s championship, but picked up a lot of ANWCC awards.

My proudest driving moments are when I was a team driver representing Wales in the 1986 Inter-association autotests held in Ireland … I was the only true Welshman, Steve Powell was from Yorkshire (although Welsh autotest champion) and Dave Cook was from Kent! … but the Irish certainly know how to put on autotests and this was a very entertaining weekend! But that is another story! Then more recently, there are the 25 consecutive Cambrian rallies. On all these events, the Mini was driven to and in most cases driven home. Looking back, I was certainly nieve, but if it were not for Pete, I certainly would have been stranded at a venue or on the side of the road, to this day. Over the years he has had a few phone calls to come and rescue me!

Within the Club
Over the years from being voted onto committee in 1982, I have been elected Chairman, Secretary and Championship Secretary, won the Sandbach trophy and won most of the club championships, but the driver’s title has eluded me. I have even done Torque Editor for one month in the ‘80’s, when there was a “go at being guest editor”. On the organising side, I have organised events from club nav nights, regional road rallies through to British championship autotests and been club steward on a few events. Although, I’m not on committee now, I often attend meetings, just to keep an eye on what’s happening within the club, that’s not recorded in Torque! 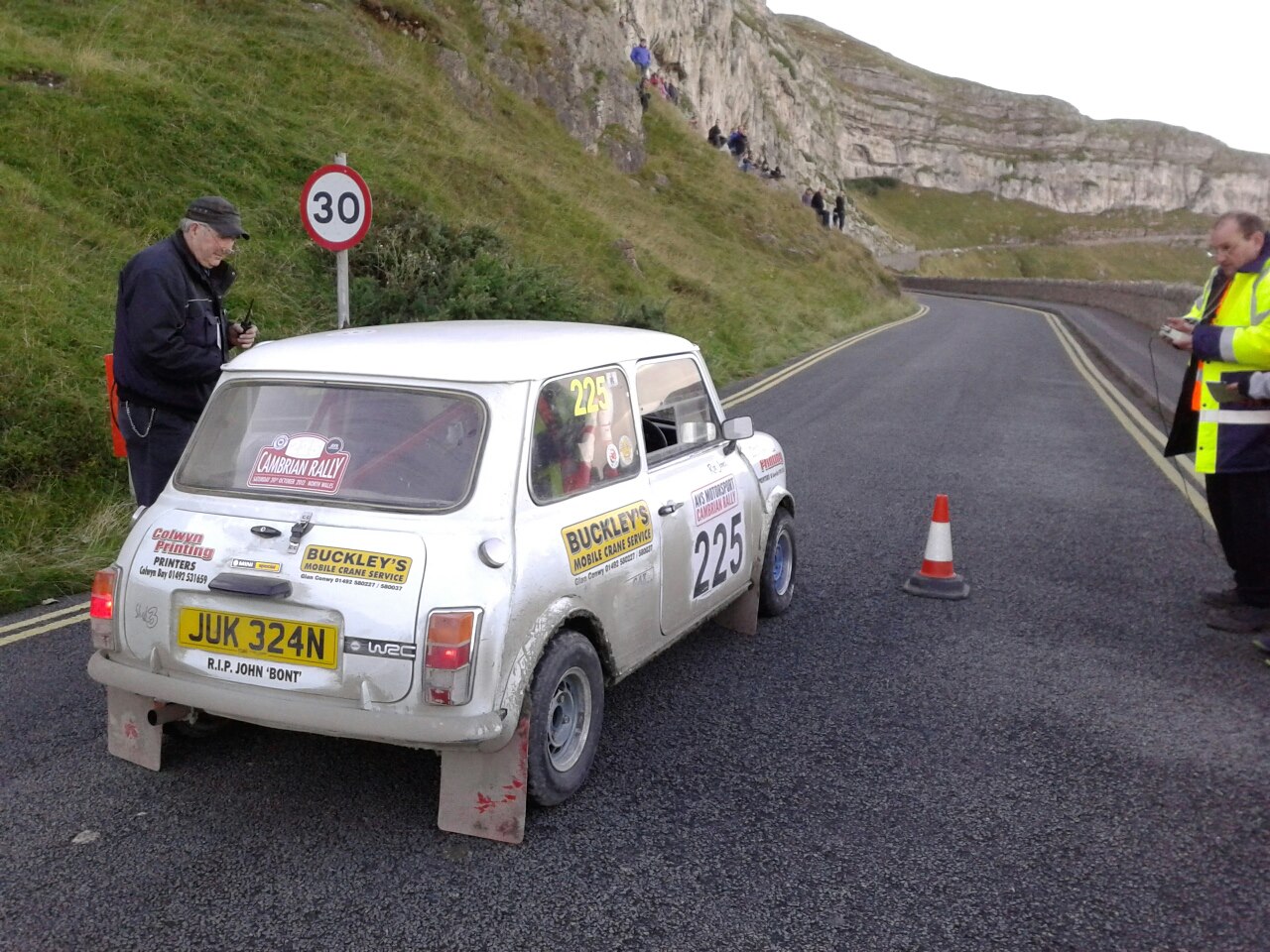